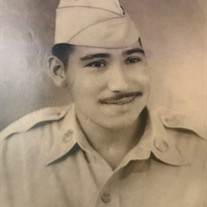 Terry Flores passed on March 6, 2021 at the age of 90 at Michael E. DeBakey Veterans Hospital. He was born on April 17, 1930, in Houston Texas to Gregorio and Luisa Flores. His parents immigrated to the Houston area in 1925. Mr. Terry Flores or Tio Terry as he was known by family and friends served in the US Army from 1951 to 1957. He was very proud to serve his country and often spoke of his personal combat experiences and the many events pertaining to the Korean War. After his military duty, he pursued a career in carpentry. His employment with Texas Trailers allowed him to expand his skills into painting, plumbing, welding, sheet metal work, woodwork, and cabinetry. His various skills are visible today in the homes of family members as well as in his own home. Terry had various interests but his most memorable one was traveling and performing with the Texas Charros. As a Charro, he participated in trail rides, the Houston Rodeo and countless other events throughout the US and Mexico. He also enjoyed woodwork, bargain shopping, collecting cookbooks, puzzles, keeping up with current events and reading his daily newspaper. Terry is survived by numerous nieces and nephews from the Houston area, Chicago and Georgia. He was preceded in death by his parents, Gregorio and Maria Luisa Flores as well all his siblings, Mary Ramirez, Josephine Tsafantakis, Carmen Hernandez, Augustin Mendoza, Nicolas Mendoza and Jesse Flores. Arrangements are as follows: Funeral service will be held on March 15, 2021 at 11:30 AM - 12:30 PM at Felix Morales Funeral Home, 2901 Canal Street, Houston, Texas. Interment will follow at 1:00 pm at St. Teresa Cemetery, 912 Buschong Street, Houston, Texas 77039. Pallbearer's will be Douglas Fesler, Anthony Tsafantakis, Patrick Carney, Rey Ramirez, Alan Winegarden, Jason Canas and William Fesler. In Lieu of flowers, donations may be made to: Michael E DeBakey VA Medical Center Attn: Voluntary Service Center, 2002 Holcomb Blvd, Houston Texas 77030. In Memo state: In Memory of Terry Flores, Voluntary Service GPF 9006. The family of Terry Flores wishes to extend our sincere thanks to all the caring and compassionate staff at the Michael E. DeBakey Veteran's Hospital. For the safety of all guests, gatherings at our facility will be limited to 80 family members and guests. Individuals at increased risk, sick or not feeling well should not attend the service. Please visit https://www.moralesfuneralhome.com/covid-19-updates/ of COVID-19 updates and regulations. All services are under the care of Morales Funeral Home. For any questions or concerns regarding the services for Terry Flores, please contact Morales Funeral Home at (713) 223-1167

Terry Flores passed on March 6, 2021 at the age of 90 at Michael E. DeBakey Veterans Hospital. He was born on April 17, 1930, in Houston Texas to Gregorio and Luisa Flores. His parents immigrated to the Houston area in 1925. Mr. Terry Flores... View Obituary & Service Information

The family of Terry Flores created this Life Tributes page to make it easy to share your memories.

Send flowers to the Flores family.