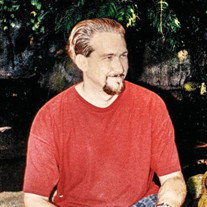 Rodney Jerome Borg, 55, of Houston, was reunited with his mother, Glenda (Parkes) Borg, and father, Brewster Borg, on Thursday, July 29th when he joined his Savior and Lord, Jesus Christ, in Heaven. Rodney was born on April 8, 1966 on base in Riverside, California to ecstatic parents as the third of what would be the four Borg boys. The apple of his mother's eye (and sometimes the pain in his father's well-disciplined side), Rodney relished in his "middle child" personality causing mischief, yet often sparking admiration and more than a few chuckles for his precocious brilliance. The family moved from base to base in Rodney's youth, finally landing back in Lake Jackson, Texas where his mother grew up and grandparents lived after his father retired from the Air Force. Rodney graduated from Brazoswood High School in 1984 much to the joy of the teachers he tormented. He followed in his devoted father's footsteps by joining the military after high school. It wasn't long after that he realized his artistic ability and skill in the kitchen and went on to culinary school where he shined through as he fed those he loved. His chocolate cake (that started out as a combination of his grandmother's and mother's recipes but turned into his own creation) was most definitely a family favorite. He met his beautiful bride, Rosa Elvia Borg-Corrales, in 2000 and married her shortly after remarking, "She's so strong and amazing, how could I not make her my wife?" Rodney enjoyed many things in his life like cooking, books, motorcycles, politics, video games, and especially Metallica, but nothing brought him more joy than his three children. They were his reason for being, and you couldn't have a conversation with him without hearing about the wonderful things each of them were doing. Preceded in death by his grandparents and parents, left to cherish the memory of his cosmic personality are his wife, Rosa; son, Aleckzander of Houston; daughters, Stephanie and Rosa Faye of Houston; brothers, Richard (Megan) of Rockwall, Michel (Mirina) of Dallas, and Steven (Magi) of Dallas; stepmother, Nancy of Lake Jackson; in-laws, Lazaro Corrales and Sanjuana Gaytan; sisters-in-law, Maria Corrales, Dora Corrales, Alicia Corrales, and Belinda Corrales; brothers-in-law, Lupe Corrales, Jose Luis Corrales, Alesandro Corrales, Miguel Corrales, and Joel Corrales; many friends; and adoring nieces and nephews that knew him as the "fun uncle." A celebration of Rodney's life will be held in the chapel at the Felix H. Morales Funeral Home, 2901 Canal St, Houston, Texas on Sunday, August 15th starting at 4 p.m. The ceremony will begin at around 5 p.m., followed by a short reception. Funeral arrangements are under the direction of Felix H. Morales Funeral Home. The Star of Hope meant a great deal to Rodney as his great grandfather was a founder. In lieu of flowers, memorial donations can be made to the Star of Hope Mission, 6897 Ardmore, Houston, Texas 77054-2307. For the safety of all guests, gatherings at our facility will be limited to 80 family members and guests. Individuals at increased risk, sick or not feeling well should not attend the service. Please visit https://www.moralesfuneralhome.com/covid-19-updates/ for COVID-19 updates and regulations. For any questions or concerns regarding the services for Rodney Borg, please contact Morales Funeral Home at (713) 223-1167. Se llevará a cabo una celebración de la vida de Rodney en la capilla de la funeraria Felix H. Morales, 2901 Canal St, Houston, Texas, el domingo 15 de agosto a partir de las 4 p.m. La ceremonia comenzará alrededor de las 5 p.m., seguida por una breve recepción. Los arreglos funerarios están bajo la dirección de la funeraria Felix H. Morales. Star of Hope significó mucho para Rodney ya que su bisabuelo fue uno de los fundadores. En lugar de flores, se pueden hacer donaciones conmemorativas a la Misión Star of Hope, 6897 Ardmore, Houston, Texas 77054-2307. Para la seguridad de todos los huéspedes, las reuniones en nuestras instalaciones se limitarán a 80 miembros de la familia e invitados. Las personas con mayor riesgo, enfermas o que no se sientan bien no deben asistir al servicio. Visite https://www.moralesfuneralhome.com/covid-19-updates/ para obtener actualizaciones y regulaciones de COVID-19. Si tiene alguna pregunta o inquietud sobre los servicios para Rodney Borg, comuníquese con Morales Funeral Home al (713) 223-1167.

Rodney Jerome Borg, 55, of Houston, was reunited with his mother, Glenda (Parkes) Borg, and father, Brewster Borg, on Thursday, July 29th when he joined his Savior and Lord, Jesus Christ, in Heaven. Rodney was born on April 8, 1966 on base in... View Obituary & Service Information

The family of Rodney Jerome Borg created this Life Tributes page to make it easy to share your memories.

Rodney Jerome Borg, 55, of Houston, was reunited with his mother,...