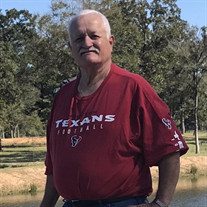 Michael LaSoya, age 71, peacefully passed away in his home on the 17th of April. Michael was born on July 30th 1950 in Galveston Texas. He grew up on the small island of Galveston and remained there until he met his wife Cecilia. The two married in 1970 and gave birth to their first daughter two years later. At the age of 23 he decided to move his family to Houston, Texas to seek a greater life and very soon after had their second daughter. He pursued a career as a crane operator and worked for his first employer for 17 years, until the company closed. He then continued his career path with his second job and remained with them for 31 years, until 2021. Michael was a very loyal and hard working man. He always put in the extra effort to provide for his family. Michael enjoyed spending time with all his grandchildren during his spare time. He also enjoyed bar-b-queing, playing pool, fishing and enjoyed the outdoors. He was a very fun loving and wonderful husband, father, grandfather and friend to all. Although he was a big man, he had one of the warmest hearts. He was great to be around and was always full of smiles and laughter. Nothing can replace a husband or father like Michael. Although he is not with us, he will always be in our hearts. We love and miss you so dearly. Michael is preceded in death by mother, Selena Espinoza, father, Michael LaSoya, Sr., sister, Esther LaSoya, brother, Joe Espinoza. He is survived by his wife, Cecilia LaSoya; two daughters, Anna Marie LaSoya and Elizabeth Ann Tobar; five grandchildren, Crystal Marie Armijo, Michael Alexander Gonzalez, Jessica Ann LaSoya, Jonathan Edward Tobar, Leanna Elizabeth LaSoya; four great-grandchildren, Jaylen Aliz Valles, Destiny Nevaeh Valles, Michael Alexander Gonzalez, Jr., Matthew Xavier Gonzalez and two great-great-grandchildren, Omar Aziz Mousa and Makayla Marie Valles; brother, Frank LaSoya and sister, Wanda Ruth LaSoya. Visitation will be held Monday, April 25, 2022, 4:00 pm - 8:00 pm at Felix H. Morales Funeral Home, Houston, Texas. A Evening Service will begin at 6:00 pm. Cremation will take place at a later date. Individuals at increased risk, sick or not feeling well should not attend the service. Please visit https://www.moralesfuneralhome.com/covid-19-updates/ of COVID-19 updates and regulations. All services are under the care of Morales Funeral Home. For any questions or concerns regarding the services for Michael Dean LaSoya, Jr., please contact Morales Funeral Home at (713) 223-1167

Michael LaSoya, age 71, peacefully passed away in his home on the 17th of April. Michael was born on July 30th 1950 in Galveston Texas. He grew up on the small island of Galveston and remained there until he met his wife Cecilia. The two married... View Obituary & Service Information

The family of Michael Dean LaSoya, Jr. created this Life Tributes page to make it easy to share your memories.

Michael LaSoya, age 71, peacefully passed away in his home on...

Send flowers to the LaSoya family.