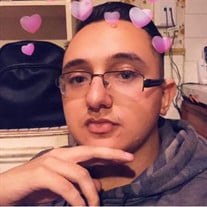 Johnny Angel Cruz, age 26 of Houston entered into eternal rest on January 23, 2021. He was born on March 11, 1994 to Johnny and Joni Cruz in Houston, TX. Johnny Angel is preceded in death by his: paternal grandparents- Josephine and Raymond Cruz maternal great grandmother- Augustina Flores paternal aunt- Sylvia Marie Cruz maternal Aunt- Maria Elaina Flores Lopez paternal cousin- Autumn Sarai Cruse paternal cousin- Victor Alphonso Trevino Bosquez Johnny Angel is survived by his: Parents- Johnny and Joni Cruz Brother-Adrian Herrera Sisters- Veronica Rodriguez, Teresa Garcia, and Jayla Cruz Son- Jayden Valadez Cruz Maternal grandparents- Manuel and Gloria Flores Godmother/Aunt- Judy DelValle Godparents/Cousins- Monica and Robert Garza Godsisters/Cousins- Taia, Kyra and Lyla Garza Godbrothers/Cousins- Lucas and Jacob DelValle, Noah Garza Nieces and nephews- Abigail(Abby), Messiah, Royal, Kane, Isaias, Ismael, Casanova, Santino, Annelyse, Sebastian, and Rowan. Johnny Angel is also survived by numerous aunts, uncles, and cousins from the maternal and paternal sides of his family. From the time Johnny Angel was a baby, he was always the sweetest boy with the friendliest and kindest heart. He brought much joy and love into the lives of his family. He always boasted that he was "the Favorite" when he was with his Aunt Judy's family. Johnny Angel shared a special bond with his sister Jayla and they were always there for each other. Johnny Angel always had the biggest heart and he would always be willing to give you the last dollar in his bank account. One of Johnny Angel's highlights in his life was when his son Jayden was born in June 2011. Johnny Angel loved his son very much and was very proud to be his father. Johnny Angel was very thankful to his parents, Johnny and Vicky for helping him raise his son with much love and stability. Johnny Angel was a student at Stephen F. Austin High School which gave him a solid foundation to help him make plans for his future. He was a member of the Austin High School Sonic Boom Marching Band and also a member of the cheerleading squad and then became the H.S. Mascot(Stevie) in his senior year. After graduation, he worked as a certified Medical assistant and then as the manager at Pronto Insurance. Johnny Angel went to Florida in October of 2019 and had a great time with many close friends. But his life drastically changed the following month in November 2019. He was taken to the emergency room because he noticed a growth on his neck. After a month of waiting, he was diagnosed with fibroblastic Sarcoma and was admitted into MD Anderson Cancer Hospital to begin intense chemo treatments. He underwent intense chemo for three straight months which left his body very debilitated. His joy in life came from the love and prayers from his family and close friends He was very happy and honored when his family made him a "get well" car parade and circle of love prayer vigils. This gave him the strength and faith to keep fighting to beat cancer. The MD Anderson doctors also continued to try different treatments to help stop the growth of the tumor. But at the end of 2020, Johnny Angel's body was too fragile and tired to continue the fight. His doctors recommended Hospice care in the first week of January 2021. Friday, January 22, 2021 started as a very sad day when the hospice team told the family that Johnny Angel only had hours or days left. But it turned into the most beautiful day when Father John Paul from the Catholic Charismatic Center gave Johnny Angel the anointing of the sick and last rites and also renewed his sacrament of Baptism. Johnny Angel was fully conscious and participated throughout all the rituals of these beautiful sacraments of the Catholic Church. Johnny Angel looked up into the ceiling after the priest left and was reaching up as if he was being guided into heaven. He then slept soundly but woke up to receive more visitors from friends and family. By the end of Friday, he was so content feeling like a King with so much love and attention. He slept soundly through the night and his family never left his bedside. Johnny Angel peacefully passed away in his sleep in the early hours of Saturday, January 23, 2021. We will never forget our Johnny Angel. You will continue to live in our hearts always and forever. Thanks to God for giving Johnny Angel a beautiful passing into eternal life. Due to COVID restrictions this Memorial Service will be a private service for invited guests only. However, the memorial service will be live streamed for all to see on our website, on Johnny Angel's tribute page. The Inurnment will be a public celebration of his birthday and will take place on March 11 at 3pm at the Forest Park Lawndale Cemetery. For the safety of all guests, gatherings at our facility will be limited to 60 family members and guests. Individuals at increased risk, sick or not feeling well should not attend the service. Please visit https://www.moralesfuneralhome.com/covid-19-updates/ for COVID-19 updates and regulations. All services are under the care of Morales Funeral Home. For any questions or concerns regarding the services for Johnny Angel Cruz, please contact Morales Funeral Home at (713) 223-1167.

Johnny Angel Cruz, age 26 of Houston entered into eternal rest on January 23, 2021. He was born on March 11, 1994 to Johnny and Joni Cruz in Houston, TX. Johnny Angel is preceded in death by his: paternal grandparents- Josephine and Raymond... View Obituary & Service Information

The family of Johnny Angel Cruz created this Life Tributes page to make it easy to share your memories.

Send flowers to the Cruz family.