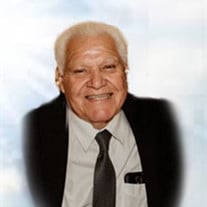 John Flores Leija passed away on July 18, 2021, just a few days before his 76th birthday. He was born on July 20,1945 to Katy and Jubentino Leija in Pasadena, Texas and was the third of four children. He is survived by his loving family - wife, Cindy Vara Leija, son Steve (Norma), daughter Carli (Manuel) Garcia, and daughter in law Kristalee Guerra Mata; his grandchildren Isabella Grace Garcia, Alyssa Mia Leija and Grayson Noah Garcia; sister in law Kandy (George) Hernandez, brothers-in-law, Rudy Vara, Jr, The Honorable Richard C. Vara, Lonnie Vara, Joe (Jane) Vara, His extended family also includes Gloria (Gordan) Alexander and Marinela (Rodney) Anderson, as well as numerous nieces, nephews and cousins. He is proceeded in death by first wife Melva Leija, his son Michael Leija, his parents Jubentino and Katy Leija, brothers Florentino Leija, Juan Leija and Ephirne Leija. John attended John R. Harris Elementary, Deady Jr. High and Milby High School, class of '64. He was a graduate of the University of Houston where he obtained his master's degree in social work. His esteemed professional career includes Big Brothers Big Sisters of Greater Houston, SER Jobs for Progress, Houston Community College, and the Houston Independent School District. In the late '70's John was the owner of the Doolan Technical Institute. Most recently he was a contractor with Houston Esperanza, a community development corporation providing affordable housing that benefits low-income individuals. John was constantly on the move and rarely slowed down. He was fiercely devoted to his faith and was a member of the Bethlehem Pentecostal Church. He would spend his Sunday mornings attending service and in fellowship with his hermanos and hermanas for a good part of the day. He would then hightail it home to change into his uniform of blue jeans and denim shirt because there was always someone somewhere needing something fixed. John always made time for those in need, making room in his heart to be there for you when you needed it. He absolutely loved working. He never tired of seeing the finished product and especially witnessing the joy the improvements he made, left on his family and friends. He was an avid hunter and looked forward to deer hunting season all year long. Planning and finishing his work were a priority to be sure to be at the lease on opening day. As years passed and his fellow hunters went to the big hunting sky, John would be content to sit at the campfire and reminisce about his hunting buddies, one being Tom Schulte and another being Freckles the Cattle dog. John found the perfect way to end his evenings by sitting in front of the wood fired stove inside of the cabin. He had made plans to take his grandson, Grayson, on his first hunting trip. John also held out hopes in getting his granddaughters, Bella, and Alyssa, out to the deer lease. This was a long-standing tradition that began with his two sons, Michael and Steve. John's warm heart combined with the toughness of his personality and strength of character allowed him to become a true craftsman in our lives, shaping and creating a legacy of love that will withstand the toughest elements and last forever in the hearts of his family. From his wife, "'Goodbyes are not forever. Goodbyes are not the end. They simply mean I'll miss you. Until we meet again.' I love you with all my heart and soul. Farewell my love." In lieu of flowers, donations may be made to the University of Houston Graduate College of Social Work, YMCA of Greater Houston or Houston Area Parkinson Society. A Visitation will be held Friday, July 23, 2021, 3:00 pm - 5:00 pm at Felix H. Morales Funeral Home, Houston, Texas and an Evening Service will begin at 5:00 pm. There will be a live stream scheduled Friday July 23, 2021 from 4:00 pm to 6:00 pm. Cremation will take place at a later date. All services are under the care of Morales Funeral Home. For any questions or concerns regarding the services for John Leija, please contact Morales Funeral Home at (713) 223-1167.

John Flores Leija passed away on July 18, 2021, just a few days before his 76th birthday. He was born on July 20,1945 to Katy and Jubentino Leija in Pasadena, Texas and was the third of four children. He is survived by his loving family - wife,... View Obituary & Service Information

The family of John Flores Leija created this Life Tributes page to make it easy to share your memories.