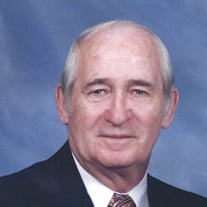 Joe W. Mathis Jr., went to his heavenly home on December 17, 2020. He was born on June 30, 1931, in Centerville, Mississippi, to Ruby and Joe W. Mathis, Sr. After graduating from Beech Stand High School in 1950, he was drafted into the U.S. Army and served overseas in Germany during the Korean Conflict from May 1951 - May, 1953. He attended Southern Mississippi College from 1954-1957, where he was a member of the Delta Sigma Pi Fraternity and graduated with a degree in Business Administration. Joe worked in the real estate and insurance industries for many years. He was an active member is the American Legion and VFW and was the Commander of his local VFW Post 8790 in the 1980s. Joe was an active member of Long Point Baptist Church and served as a Deacon for many years. Joe is preceded in death by his loving wife of 27 years, Mary Lois Mathis. He leaves behind three younger sisters, Mildred Hinson, Joyce Jones and Sandra Tinsley; two daughters, Jodi Mathis Hurst and Rebecca Lynn Mitchell; and, two stepchildren, Michael Damon Hoge and Georgiana Teeple, each one he adored immensely. Joe was a proud PawPaw to Kathryn Hurst, Garrett Mitchell, and Grace Mitchell. Joe loved his family, friends and fellow Veterans and had a nickname for each one. In the last decade of his life, Joe enjoyed going to the Sheltering Arms Senior Center to "whup up" on his buddies playing dominos. He also loved to listen to great music and dance. Joe's Memorial Service is scheduled for Wednesday, June 30, 2021, which would be his 90th Birthday. The services will be held promptly at 1:00 p.m. at the Houston VA National Cemetery located at 10410 Veterans Memorial Drive, Houston, Texas 77038, Lane No. 1. In lieu of flowers, Joe's family would like a bush or tree planted in his memory to ensure his legacy lives on for generations to come.

The family of Joe W. Mathis, Jr. created this Life Tributes page to make it easy to share your memories.