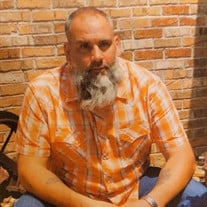 Jason Darnell Click was born on December 2, 1974,the youngest son of Royce Click and the late Linda Golden in Houston, Texas. Jason graduated in 1993 from McArthur High School in Houston, TX. He went on to play football at Howard Payne University in Brownwood, TX. He lived in Magnolia, TX where he loved to tinker with anything that had rust on it. He loved to ride his motorcycle and work on old trucks. His motorcycle and old trucks had a distinct SoCal style that suited him well. His most recent project was a 1967 Ford F100. He worked for Shaw Pipeline before joining Stanley Pipeline, where he worked for the last eight years. Jason traveled the world with Stanley Pipeline to Singapore, Dubai, the Bering Sea, and the Mediterranean Sea. Jason loved to go hunting with family and friends, and relished a simple life of sitting on the back porch enjoying the company of family and friends. Although tall in stature and strong as an ox, he was a kind soul with a smile that lit up any room he entered. His strength was tested over the last two years, but he met his challenges with courage, quiet resolve and fierce determination. Losing a husband, son, brother, and father is not easy. Knowing he is watching over his family and friends with that smile on his face, waving as he rides off to Heaven on his motorcycle, gives everyone who loves him some comfort and peace. His hardworking nature and joyful laugh will never be forgotten. Jason is preceded in death by his mother, Linda Golden, stepfather, Glynn Golden and brother, Chris Click. He is survived by his wife, Lisa Click; stepdaughter, Debra "Nikki" Washington; father and stepmother, Royce and Monica Click, his sister Amy (Jack) Avery; his nieces and nephews: Raelyn, Matthew, Brittany, Nicholas, Tommy and Bryn and daughter, Maggie. He is also survived by many aunts, uncles, cousins, and long-time friends Jeff Byrd (Tammy) and Eric Parris, who were like brothers to Jason. A Memorial Service will be held Saturday, August 14, 2021, 12:00pm – 4:00pm at Felix H. Morales Funeral Home, Houston, Texas.

Jason Darnell Click was born on December 2, 1974,the youngest son of Royce Click and the late Linda Golden in Houston, Texas. Jason graduated in 1993 from McArthur High School in Houston, TX. He went on to play football at Howard Payne University... View Obituary & Service Information

The family of Jason Darnell Click created this Life Tributes page to make it easy to share your memories.

Jason Darnell Click was born on December 2, 1974,the youngest...