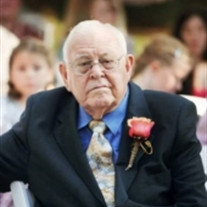 James C. Whiteman, 93, of Owosso, passed away on Thursday, October 14, 2021, at Chesaning Comfort Care. James was born December 29, 1927, to Raymond and Amy (Settle) Whiteman in Pontiac, Illinois. James served his country bravely in the United State Army Air Corp from 1946-1948. He married Ms. Barbara Richardson on August 4, 1951, in Las Vegas, Nevada and within a year he completed his education at Whittier College in California; June of 1952. He obtained a job working for Shell Oil Company as a Geophysicist and remained there until his retirement on July 31, 1989 following 37 years of dedicated service. James' grandson, Jarred Moyers is currently an employee of Shell Oil, making his papa very proud. James, more affectionately known as Papa, was proud of his children's accomplishments but nothing compared to the achievements of all of his grandchildren. Papa is survived by his children; Ron Whiteman, Dave (Sue Ann) Whiteman, Kevin (Linda) Whiteman, Jennifer (Marvin) Moyers, his grandchildren; Dana, Sara, Valarie, Mary Anne, Megan, Jarred, Mario and Mickelynne. and 21 great-grandchildren. He was preceded in death by his daughter; Diane Newham in 1992, his beloved wife; Barbara "Bobbi" Whiteman in 1993, and his parents; Raymond and Amy Whiteman. A private interment will take place at Houston National Cemetery, Houston Texas next to his wife, Barbara (Richardson) Whiteman. All services are under the care of Morales Funeral Home. For any questions or concerns regarding the services for James Whiteman, please contact Morales Funeral Home at (713) 223-1167

The family of James "Papa" Whiteman created this Life Tributes page to make it easy to share your memories.

James C. Whiteman, 93, of Owosso, passed away on Thursday, October...

Send flowers to the Whiteman family.