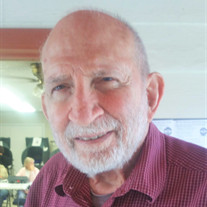 Haskell P. Rosenthal, Mathematician and beloved father, unexpectedly passed away Sunday, Dec 5th, 2021 at the age of 81 in his Houston residence. He is survived by his three sons Jon, James, and Michael, as well as his former wife of 20 years Gayle Rosenthal, and former step-children Joel, Leanne, and Jefferey Meyerson. He is predeceased by his parents Joseph Rosenthal and Sarah Marcia Cohen and by his younger brother David Rosenthal, as well as his first wife of 18 years Maryon Nagles-Gonzalez. Haskell was born July 8th, 1940 in the rural town of Bowman, North Dakota. He was born with a physical deformity (club foot), and persevered through 19 separate operations to finally be able to walk and eventually run. Being the son of educators, he developed his passion for education early in life. He grew up in the classroom where his mother taught. Haskell won the National Merit Scholarship when he was 16 years old. He went to MIT where he graduated with honors, earning his BS in Mathematics at 20 years of age. He then went to graduate school at Stanford University where he earned his PhD in Mathematics at the age of 24. Haskell started teaching at UC Berkeley in the early 60s and quickly rose to acclaim for his groundbreaking work in Banach Space Theory. His career developed as he taught at Berkeley and he avidly worked with the international community of theoretical mathematicians in his areas of interest. He attended an annual Mathematics Conference in Paris, France for decades, as well as numerous other conferences around the globe throughout his career. He developed lifelong relationships with colleagues from across the planet. He visited and worked at many universities, spending a semester at Rice University in Houston, and spending a year as a visiting Professor at Ohio State University in Columbus. In the 70s Haskell moved to University of Illinois in Champaign/Urbana, and from there he took a sabbatical year as a visiting professor at the Hebrew University at Jerusalem. Haskell was recruited by The University of Texas at Austin in 1979, where he held the first Chair ever endowed in the Mathematics Department, the John T. Stuart III Centennial Professor of Mathematics, for over 25 years, until he retired with Emeritus status in 2005 due to a debilitating illness. Having authored around 100 papers, Haskell is still the most referenced author in his field, and is recognized as a Father of modern Banach Space Theory. He was of course passionate about Math, as well as Philosophy, Politics, and Music. He played classical piano and cello, performing piano recitals and giving piano lessons to earn extra money in his youth. An active member of the Jewish communities in Austin and in Champaign/Urbana, Haskell taught Israeli Folk Dancing for over 30 years and traveled for folk dance camps and retreats. He sang in various choirs including the Congregation Agudas Achim choir. He treasured and practiced his Conservative Jewish faith. Haskell lived a life full of adventures and passion. He loved fine dining and wine, spoke fluent French and some Hebrew too, and loved to hike in the mountains. He helped to develop many mathematical minds and shaped many careers. Former students cited his classes as inspirational and transformative, and many of his former graduate students now hold faculty positions all over the world. Haskell P. Rosenthal left an enduring imprint on Earth, and will be missed by many. A Memorial Service will be held Tuesday, January 11th 11:00 am at Felix H. Morales Funeral Home, Houston, Texas. Individuals at increased risk, sick or not feeling well should not attend the service. Please visit https://www.moralesfuneralhome.com/covid-19-updates/ of COVID-19 updates and regulations. All services are under the care of Morales Funeral Home. For any questions or concerns regarding the services for Haskell Rosenthal, please contact Morales Funeral Home at (713) 223-1167

Haskell P. Rosenthal, Mathematician and beloved father, unexpectedly passed away Sunday, Dec 5th, 2021 at the age of 81 in his Houston residence. He is survived by his three sons Jon, James, and Michael, as well as his former wife of 20 years... View Obituary & Service Information

The family of Haskell Paul Rosenthal created this Life Tributes page to make it easy to share your memories.

Send flowers to the Rosenthal family.