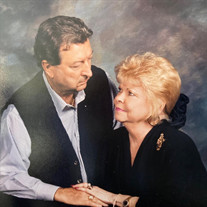 Glen Roger Slaven, 90, of Houston, TX passed away peacefully in his home on Thursday, January 7th, 2021. Glen was born on June 2nd, 1930 in Steubenville, OH. Glen is preceded in death by his parents Virgil Slaven and Margaret Wilson along with his wife, Bernadine "Bebe" Kelley and son, Kelly Glen. Glen is survived by his son and daughter, Bryan Slaven (Donna) and Kimberly Sue Markim (Dan) along with grandchildren, Kimberly Slaven Buswell (Danny), Jeffery Glen Markim (Avery), Ryan Kelley Slaven (Lupita), Nicole Sue Markim, Brandon Douglas Slaven, Jordan Bryan Markim; and great-grandchildren, Brianna Elizabeth Buswell, Isabel Villa, Jordyn Kelley Buswell, Cash Kelley Markim, Bryan James Buswell, and Luke Jordan Markim. Glen was a man among men. He was a ROCK that we could all count on. He had an unwavering commitment to his family, both to his wife Bernie of 65 years and his children and grandchildren. Glen had a clear set of values and was a man of utmost integrity and pride. He was always sharply dressed and clean shaven with polished shoes. He would look you in the eye and shake your hand. He overcame obstacles with grace. Soon after being married, he and Bebe moved to Houston in the 50's without a dime. He worked hard to come to own and run a thriving printing company, Carroll Printing and Promotions, for 30+ years, which his son has continued to successfully run. Glen was a true patriot. He was honorably discharged from the Army after four years of service with the 82nd Airborne Division. He wore his "wings" around his neck until the day he passed. He religiously watched the news and loved to have passionate discussions on the current state and history of the country. Glen was loved by all in the community. He was known for his acceptance of others and his ability to listen well, shown clearly by his enjoyment of long conversations with Uber drivers on the way to the Club. He was a member at Pine Forest Country Club for over 50 years and had many adopted "sons" and "brothers" in addition to his own that he counseled regularly on the golf course or around the gin-rummy table in the Men's Locker Room. He and Bebe attended the Oaks Christian Church just down the street from their home for many years. He was a regular attendee of Sunday School and enjoyed seeing Bebe occasionally play the organ and walk his daughter down the aisle there. To commemorate their last 60 years living in the Candlelight Estates, we will be beautifying the cul-de-sac circle across from their home with two benches and many plants and flowers, a passion of Glen's. Glen's last day at full strength was Christmas day. He held his great-grandchildren on his lap, hit golf balls into the lake, danced with his daughter, played gin-rummy (and won), and ate prime rib and drank good bourbon. He laughed and opened presents with the family. Having lived a full life of almost 91 years, he passed quietly in his sleep the morning of January 7th surrounded by family and loved by all. Due to the pandemic, the family will have a small private Celebration of Life at the home of Bryan and Donna Slaven. In lieu of fresh cut flowers, please considering sending a plant to contribute to Bernie and Glen's memorial garden across from 5018 Shady Nook Court, Houston, TX 77018.

Glen Roger Slaven, 90, of Houston, TX passed away peacefully in his home on Thursday, January 7th, 2021. Glen was born on June 2nd, 1930 in Steubenville, OH. Glen is preceded in death by his parents Virgil Slaven and Margaret Wilson along with... View Obituary & Service Information

The family of Glen R Slaven created this Life Tributes page to make it easy to share your memories.

Send flowers to the Slaven family.