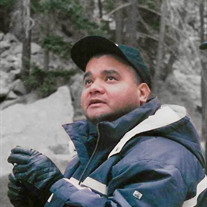 On June 9, 2022, our family lost our Brother, Uncle and Son, Gilbert Palacios Jr. On March 24, 2021, Gilbert (Jr. to us) received a diagnosis of inoperable stage 3 pancreatic cancer. Jr. withstood chemo and radiation treatments for one year. He told us his wish was to live until his 60th birthday. When Jr.'s diagnosis escalated to stage 4, his wish changed to simply seeing the Super Bowl one more time. As a boy and a young teen, Jr. was always game to play any sport with the neighborhood kids. Later, you would often see Jr. jogging through the streets of our neighborhood with the theme song to Rocky blasting through his headphones. As an adult, Jr. proudly served in the United States Army where he was stationed in Killeen and Germany. Later, he was a Reservist who was called to active duty during the Gulf War. In the years following the war, Jr. worked odd jobs ranging from fast food cook to convenience store clerk to hotel maintenance worker. His final job, as a Metro-lift driver for 10-years, was his favorite. Our brother was a man of little means and simple pleasures. He enjoyed eating good food, watching television shows and his favorite sports teams, the Texans, the Astros and the Rockets. Gilbert Jr. Palacios August 2, 1963 - June 9, 2022 Love ♥ you, Palacios Family Gilbert is preceded in death by his Father, Gilbert Palacios, Sr.. He is survived by his beloved family which includes his Mother, Ophelia Gonzales Palacios; Two Sisters, Annette Palacios Cisneros, America Michelle Palacios; Brother, Jonathan Palacios; Two Brothers-in-law, Albert A. Cisneros, Errol Hughes; Three Nephews, Ellis Hughes, Albert Ethan Cisneros, Arthur Nicholas Cisneros; Two Nieces, Alison Hughes, Clancy Palacios Hughes. Visitation will be held Thursday, June 16, 2022, 9:00 am - 12:00 pm at Felix H. Morales Funeral Home, Houston, Texas with a Funeral Service beginning at 12:00 pm. Rite of Committal will follow at Houston National Cemetery. Individuals at increased risk, sick or not feeling well should not attend the service. Please visit https://www.moralesfuneralhome.com/covid-19-updates/ for COVID-19 updates and regulations. All services are under the care of Morales Funeral Home. For any questions or concerns regarding the services for Gilbert Palacios, please contact Morales Funeral Home at (713) 223-1167.

On June 9, 2022, our family lost our Brother, Uncle and Son, Gilbert Palacios Jr. On March 24, 2021, Gilbert (Jr. to us) received a diagnosis of inoperable stage 3 pancreatic cancer. Jr. withstood chemo and radiation treatments for one year.... View Obituary & Service Information

The family of Gilbert Palacios Jr. created this Life Tributes page to make it easy to share your memories.

Send flowers to the Palacios family.