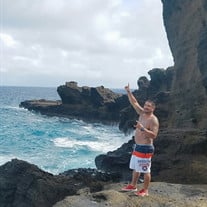 Gerardo E. "Gerad" Rivera was born July 17, 1979, and departed our physical world on March 30, 2022. He was born to Vicente Rivera, Sr. and Mary E. Rivera. Gerardo is a middle child and grew up with five siblings in barrio, Denver Harbor - Lil' Red. He endured all walks of life in the borrowed time he shared on earth. He is a father to his only daughter, Lil Mary E. Gonzales-Rivera. Rocco, his adored Bull Terrier was his first fur kid, along with Metallica, Fergie, and Ozzy. He is an uncle to countless nephews and nieces. Gerardo is a friend to many and an associate to many more. In his early years, he obtained his Texas CDL License and then, became a part of the Southern States Millwright of South Texas. He was a devoted, true fan of the Houston Rockets and Houston Astros. Watching and attending stadium games is where his passion for standing for something began, and never ended. Gerardo was a hands-on stand-up kind of casual guy. His inclination for the outdoors was noted heavily in camping trips to New Braunfels. The sun rays beaming on his beautiful brown tattooed skin highlighted his huge bright white smile while floating on the Texas spring rivers - San Marcos and Comal River where you would catch him in the summers. An ice-cold beer, lighting up the BBQ pit and traveling adventures were his delights. Gerardo was a foodie, and a huge appetite he always had. If that meant trying out new restaurants or stopping by friends and his sister's houses to enjoy a meal to spread some joy, you could count him in. Gerardo, whether he was in a good or bad mood, always helped others when they needed him. We all have our days, and he knew he was on borrowed time. He was known for his contagious laugh that spread with love to everyone he touched. He was the definition of loyalty when time got tested right before his eyes. Gerardo, my dad, Vicente's son, your brother, your uncle, your nephew, your cousin, and your boy Gerad had a heart of gold. His physical being is already deeply missed by all. He is in a better place and he will always be watching over us all. We may not be able to see him, but his presence will be forever felt. People come and go so unexpectedly, and sometimes humans forget that nothing really last as long as we hoped it would, but Gerardo E. Rivera, loves you all. Now, Gerardo has gotten peace, and rest. He will join the sun god, his mother, and his brother in the eternal everlasting gates of heaven. Gerardo is preceded in death by his Mother, Mary E. Rivera and Oldest Brother, Vicente Rivera, Jr.. He is survived by; Daughter, Mary E. Gonzales-Rivera; Partner, Jessyka D. Garcia; Father, Vicente Rivera, Sr.; Two Sisters, Tina Ortiz, Viviana Rivera; Brother, Gabriel Rivera; Countless Nephews and Nieces. Visitation will be held Sunday, April 10, 2022, 3:00 pm - 8:00 pm at Felix H. Morales Funeral Home, Houston, Texas with a Rosary beginning at 6:00 pm. A Funeral Mass will be held on Monday, April 11, 2022, 10:00 am at Resurrection Catholic Church. Rite of Committal will follow at Forest Park Lawndale Cemetery. Individuals at increased risk, sick or not feeling well should not attend the service. Please visit https://www.moralesfuneralhome.com/covid-19-updates/ for COVID-19 updates and regulations. All services are under the care of Morales Funeral Home. For any questions or concerns regarding the services for Gerardo Rivera, please contact Morales Funeral Home at (713) 223-1167.

Gerardo E. "Gerad" Rivera was born July 17, 1979, and departed our physical world on March 30, 2022. He was born to Vicente Rivera, Sr. and Mary E. Rivera. Gerardo is a middle child and grew up with five siblings in barrio, Denver Harbor - Lil'... View Obituary & Service Information

The family of Gerardo E. "Gerad" Rivera created this Life Tributes page to make it easy to share your memories.

Send flowers to the Rivera family.