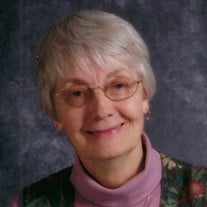 Gay Ann Gustafson was born on June 11, 1940 in Fergus Falls, Minnesota to George & Audrey (Sovia) Gustafson. The second of seven children, she grew up in St Paul, Minnesota in a very active household. Church groups, dancing, and singing were common family activities, and Gay Ann was also very active in Girl Scouts and had fond memories of attending Roundup. She still has friends from Ramsey Elementary School and Central High School, attending reunions faithfully throughout her life. She was a homecoming queen candidate, Queen of Homes for the Home Builders Association in 1959, and she had a brief modeling career. She attended Macalester College, participating in debate and plays. She married in 1962 and had four children born in four different states as the family grew and moved around the country before settling in Houston, Texas in 1972. She lived at that same home in Houston through her divorce, children growing up and leaving home, and several years of remodeling to make it just the way she wanted it, until it became untenable for her to live there independently in the last couple of years. She was intelligent, strong, independent, had boundless energy, and an insatiable desire to engage with people. She had a profound curiosity about everything in life and shared her love for learning with everyone. She was a born leader, speaker, performer, and teacher whose chosen careers in religious education, ESL and elementary education amplified her natural gifts. She saw a room full of people as an opportunity to make more friends and potential dance partners. She loved the Texas Zydeco community and could often be found dancing all night at the Big Easy and Jax Grill. She believed in helping others and volunteered for arts and education and social justice organizations throughout her life. She was well-known in the Houston community for her involvement in VIPS with HISD, the Texas Institute for Arts and Education, the Asia Society Texas Center, the Houston International Festival, the Museum of Fine Arts, the Houston Museum of National Science, Wortham Theater, Chrysalis Dance Company, and Project Row Houses, to name just a few, and more broadly for her work with UUSC. She was also a host family for students from many different countries. She lived by the rules that everything and everyone had value, and nothing should be thrown out because it might be useful at some point in the future for some art project. She was diagnosed with Lewy body dementia three years ago and had a rather rapid decline, moving in with her son in Houston with the constant care and companionship of some really wonderful caregivers. She died on February 24, 2021 with her son, grandson, and caregiver at her side, surrounded by the many voices of family as they gathered on Zoom throughout the day to be there for her and for each other, telling stories and laughing. She would have loved the party. She is deeply missed by so many, but especially her family. She is survived by three sisters, Ardyce Gustafson Rigg (Bob), Ann Gustafson Page, Ruth Gustafson Bachman (Dale); in-laws Debby Gustafson and Lyle Hanzal (Cheryl); four children, Julia Lyders Easley (Allen), Pauline Lyders (David Neidorf), Richard Jason Lyders, Eric Lyders (Becca), 8 grandchildren, and 18 nieces and nephews. She was preceded in death by her parents, George Gustafson and Audrey Sovia Gustafson, siblings Kristin Gustafson Hanzal, Bruce Gustafson, and Glen Gustafson, and brother-in-law Jim Page. Special gratitude to her caregivers, especially David Rocha, Elgin Lewis, and Eucharia Muofhe, but also Will, Israel, and Alphonsus and several others, who loved her for who she was and helped her to be comfortable and happy until the end. Due to current restrictions on gatherings, we are looking to a future date when we can all come together to sing and dance and share stories in celebration of her life and scatter her ashes in the North Woods of Minnesota. Additionally, an endowed scholarship benefiting future generations of artists has been established by the family through HSPVA Friends at https://hspvafriends.org/gustafson/. All services are under the care of Morales Funeral Home. For any questions or concerns regarding the services for Gay Ann Gustafson, please contact Morales Funeral Home at (713) 223-1167.

Gay Ann Gustafson was born on June 11, 1940 in Fergus Falls, Minnesota to George & Audrey (Sovia) Gustafson. The second of seven children, she grew up in St Paul, Minnesota in a very active household. Church groups, dancing, and singing were... View Obituary & Service Information

The family of Gay Ann Gustafson created this Life Tributes page to make it easy to share your memories.

Send flowers to the Gustafson family.