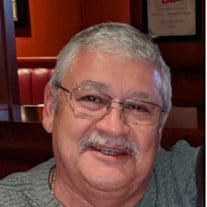 On Tuesday, March 9, 2021 Enrique Rojas Jr., loving brother, husband, and father, of 3 children and 2 step children passed away at the age of 62. Rick was born on June 8, 1958 in Brownsville, TX to Enrique D. Lopez and Susana C. Rojas. His family moved to California shortly after, and this is where he laid down his roots and was molded into the man we know and care about today. He attended college, until he found his passion as a piping and plant designer. He started his career in California, until greater opportunities came calling and he moved his family to Houston, TX and he continued his career for another 25 years. On September 25, 1988, he married Ann L. Aburto. They raised three sons Randal, Richard, and Rusty. After his first wife passed he found love and joy again in the arms of Diane R. Lopez. They married on April 10, 2016 and he became a stepfather to Javier D. Rivera and Matthew R. Sadler, as his family grew bigger. Rick had a passion for coaching. He enjoyed coaching his sons in youth sports, and when they grew older, and he no longer could coach them he still had a passion to coach and pass on knowledge of baseball to future generations. He volunteered his time during the year to coach baseball at Kyle Chapman Pony League. If he wasn't on the baseball field you could find him spending time with friends and family. One thing he enjoyed most with them was having his family and/or friends at his house where he could grill for them with a beer in hand. He had a love for grilling, and later developed a passion for cooking and trying new recipes with his wife Diane. He was an avid sports fan, and enjoyed rooting for his teams. He was a Dallas Cowboys fan, Los Angeles Dodger fan, and Los Angeles Lakers fan. He was known for his good heart, his infectious smile, and his kind and compassionate spirit. Lastly he cared about his sons more than life itself and would have done anything for them. Rick was preceded in death by his biological father, Enrique D. Lopez, his mother Susana C. Rojas, and his first wife Ann L. Rojas. He is survived by his three sons Randal A. Rojas, Richard A. Rojas, and Rusty A. Rojas. Also his wife Diane R. Rojas and her two sons Javier D. Rivera and Matthew R. Sadler. Lastly his adoptive Dad Enrique H. Rojas, his sister Becky R. Lechuga, his brother Alex C. Rojas, his brother Eddie C. Rojas, and his sister Susie A. Rojas, and many cousins, nieces, and nephews. Visitation will be held Friday, March 19, 2021, 12:00 pm - 1:00 pm at St. Anne Catholic Church. A Funeral Mass will follow at 1:00 pm. Cremation will take place at a later date. Individuals at increased risk, sick or not feeling well should not attend the service. Please visit https://www.moralesfuneralhome.com/covid-19-updates/ for COVID-19 updates and regulations. All services are under the care of Morales Funeral Home. For any questions or concerns regarding the services for Enrique Rojas, please contact Morales Funeral Home at (713) 223-1167.

On Tuesday, March 9, 2021 Enrique Rojas Jr., loving brother, husband, and father, of 3 children and 2 step children passed away at the age of 62. Rick was born on June 8, 1958 in Brownsville, TX to Enrique D. Lopez and Susana C. Rojas. His... View Obituary & Service Information

The family of Enrique Rojas Jr. created this Life Tributes page to make it easy to share your memories.

Send flowers to the Rojas family.