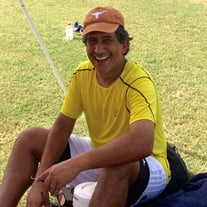 Christian Cuauhtémoc Navarro, 49, passed away on Thursday, March 31, 2022. Born on July 21, 1972, in Houston, TX, Christian was the only son of William Navarro and Yolanda Black Navarro, beloved husband of Jill Garrison Navarro, and proud father of Renee and Rosalie. Christian spent his early years in the East End before moving to Willowbend where he attended St. Thomas More Parish School through the 8th grade. Christian graduated from St. Thomas High School in 1990. While at St. Thomas, he was named a Texas Blue Chip Senior as one of the top goalkeepers in the state and he was awarded multiple academic college scholarships. Christian was a goalkeeper for the University of New Mexico Men's Lobos soccer team and an enthusiastic member of Lambda Chi Alpha fraternity. He graduated in 1995, earning degrees in Political Science and History. Christian continued his education and earned a degree in Law from the University of Texas in Austin. He then returned to Houston to help manage their family restaurant, Villa Arcos, and begin his law practice. Christian's family meant everything to him, which held most true for Jill, and their daughters Renee and Rosalie. Although Christian was an only child, he was always surrounded by a large and loving family, who instilled the values he would carry on in his own family. Christian met Jill while campaigning for his mother, Yolanda, in 1999. Jill also had a passionate political spirit and they fell in love. Christian and Jill were married in 2004 and purchased his childhood home in the neighborhood where he and Jill would lay the foundation to grow their family. Christian's nurturing and playful spirit made Jill happy and balanced well with her ducks-in-a-row personality. When they welcomed their daughters into the world, everything they loved in each other became clearer as they saw that Renee and Rosalie had inherited the best of each of them. His girls were his pride and joy and listening to their musical performances and cheering them on at their sporting events filled his heart. He was a loving, patient, and supportive dad and was adored by his daughters. He loved nothing more than spending time with his family and was happiest when his family, work, and community were intertwined. Christian's commitment to community and civic service was instilled at an early age. His love for the East End began with his mother, who was a pioneer for advocacy in the Hispanic community. He was passionate about the East End, his family restaurant, the culture, and the people who live and play there. These values were reflected through adulthood where his civic and political contributions would make an impact not only in the East End, but also in Willowbend, the girls' schools, and throughout youth and adult soccer organizations in Houston. He worked hard to carry on his mother's work, including Shoes for Kids which has provided over 30,000 pairs of shoes to children in the East End. Christian was also a visible and vital presence in his neighborhood. He would run for hours and was a Houston Marathon Legacy Runner, finishing twelve times. He also served on the Willow Pool board and as the Wahoo Swim Team "Grill Master". Christian was a founding member of the Willow Park pickup soccer game which led to many league championships, late nights of laughter and celebrations, and more importantly, a slew of soccer players who consider each other family. Through these pick-up games, he developed an affinity for the Bellaire High School's ESL soccer team, mentoring students' past graduation, and donating cleats, warm clothing, Dynamo tickets, and funds to support them. Christian was always willing to step up and did so after Harvey, working tirelessly for weeks with teammates and friends remediating homes and then sharing beers and tears after a long day's work. Christian and his friends started an annual tradition of a "no moms allowed" camping trip every Spring Break, which the children very quickly christened "No Rules in The Forest" as they enjoyed the great outdoors under loose supervision. If you were fortunate enough to call Christian a friend, you know that his compassion for others and his keen sense of humor brought people together. Christian made meaningful relationships wherever he went. When you met Christian, you wanted to be a part of his world and wanted him to be a part of yours. His willingness to help, without judgment or consideration of himself, was inspirational and made a difference in so many people's lives. Christian's spirit will live on through his contributions to his community, the friendships he helped build, and his love for his family. Preceded in death by his grandmothers, Velia and Estella; mother, Yolanda; father, William; and stepmother, Linda. Christian is survived by his wife Jill, daughters Renee, 16, and Rosalie, 12; his in-laws, Ken and Nancy Garrison, brother-in-law Danny, and nephew Bryson; his Aunt Gloria, Uncle Joel, cousins Jennifer, Bernadette, and Jacob, and their families; and numerous other family members and friends. In lieu of flowers, please consider donating to Shoes for Kids at www.houstonshoesforkids.org. A Celebration of Life will be held on a future date.

In lieu of flowers, please consider donating to Shoes for Kids at www.houstonshoesforkids.org.