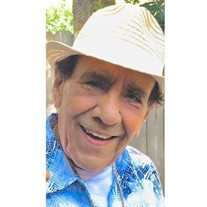 Anthony Flores Costello was born on August 15, 1937 in Houston, Texas to Eugene and Marcelina Costello. He is preceeded in death by his daughter, Paula Costello Barnes, parents Eugene Costello, Marcelina Costello Mendoza, beloved step father Toribio Z. Mendoza; brothers Philip Costello, Jesse Castillo, Mariano Mendoza, Toribio F. Mendoza, Domingo Mendoza, sister, Mary Lou Mendoza; mothers of his children, Judith Meyer, and Sandra Marie Dufrene. Mr. Costello is survived by his sons, Anthony Joseph Costello, Anthony J. Costello (Lilly Costello), his daughter Tamara Costello Machado (John Machado); his grandchildren Christina Maria Costello, Joseph Costello, Tara Costello, Tessa Costello, Josephine Edelia Machado, John Carter Machado; his sisters, Irene Hernandez, Patsy Garza, Bonnie Sue Vences, Marcela Mendoza; his brother, Valentino Costello; his beloved Godson, Samuel J. Carter, also survived by Mary Helen Shaffner, Sandra Costello Taylor, and many loving nephews, nieces and friends Anthony was one of five children born to parents Eugene and Marcelina Costello. When he was a young child, Anthony's father died. Anthony's mother remarried Toribio Z. Mendoza, a union that resulted in Anthony being one of twelve children, including five sisters and seven brothers. He would always describe his childhood as "beautiful," full of fun with his siblings and full of delicious homemade and organic food. In the 1940's, Anthony's days were spend attending De Zavala School in Houston's East End and exploring Houston's fairly new ship channel with his brothers. During the 1950's, Anthony married his sweetheart and had a beautiful daughter, Paula. During this time, he took up the sport of boxing. He quickly rose through the ranks winning five boxing titles, three of which were Houston Golden Glove titles in the Featherweight Division. His accomplishments made him a local champion, affectionately earning him the nickname, "Champ." After he ended his boxing career, Anthony continued to give back to the sport as a coach for the Magnolia YMCA (Magnolia "Y") Boxing Team, where he trained dozens of young men to become great boxers and competitors. In the 1960's, Anthony moved to New Orleans, Louisiana to work with his brothers in the remodeling business. He fell in love with New Orleans, remained there for many years, was married twice and had two beautiful sons, Anthony "Tone" and Anthony "Cooneybear." Unfortunately, he acquired tuberculosis during this time. In those days, many people still succumbed to the disease. Anthony was told he was allergic to the medications used to successfully treat his condition. Options included undergoing lung surgery which would result in being disabled the rest of his life or he could "try" alternative therapeutics while laying completing still in bed over a two-year period. However, if he chose this, he would likely not survive. Anthony was in his thirties at the time and could not imagine being disabled the rest of his life. He famously stated, "show me my bed" and a little over two years later, left the tuberculosis sanitorium in Tyler, Texas fully cured, heading back to his hometown of Houston, Texas. Upon return to Houston, Anthony's entrepreneurial spirit was born. He opened The Night Life Nightclub on Post Oak Boulevard. A few years later, he earned a cosmetology license and opened a hair salon in the NASA area. He told stories of being a hairdresser for the wives of astronauts and that this experience taught him a lot about how beauty comes from the inside. In the 1970's, Anthony married the mother of his daughter, Tamara. Together they opened his greatest business venture, Big State Tile Company. He spent the next forty years enjoying and growing his business through residential and commercial projects throughout Texas. During this time, he faced, battled and won a fight against prostate cancer. Anthony loved Big State Tile Company and retired when he was 80 years old. His final years included the joy of his grandchildren, favorite meals, attending parties and a fierce fight against multiple myeloma, of which he would bravely state with a smile, "it's just another battle." Throughout his life, Anthony bravely faced adversity and embraced love and opportunity. He enjoyed art, photography, antiques, cooking, exercising in Memorial Park, an occasional fight, being a boxing coach and judge, the companionship of his large family and his many, many friends. He was known for his unique style, booming voice, positive outlook, common sense approach and fierce bravery. Anthony Flores Costello, "Papa Tony" will be dearly missed by his family and friends and his legacy will remain their hearts and memories forever. Visitation will be Wednesday June 30th, 2021 from 3:00 PM to 8:00 PM with a rosary starting at 6:00 PM that evening. Funeral Mass will take place the following morning Thursday July 1st, 2021 at All Saints Catholic Church located at 215 E 10th St, Houston, TX 77008. Committal service will follow at Woodlawn Cemetery located at 1101 Antoine Dr, Houston, TX 77055. For the safety of all guests, gatherings at our facility will be limited to 80 family members and guests. Individuals at increased risk, sick or not feeling well should not attend the service. Please visit https://www.moralesfuneralhome.com/covid-19-updates/ of COVID-19 updates and regulations. All flowers can be ordered through the family's preferred florist Sicola's Florist 713-742-6527. www.sicolasflorist.com All services are under the care of Morales Funeral Home. For any questions or concerns regarding the services for Anthony Costello, please contact Morales Funeral Home at (713) 223-1167

The family of Anthony Flores Costello created this Life Tributes page to make it easy to share your memories.

Send flowers to the Costello family.