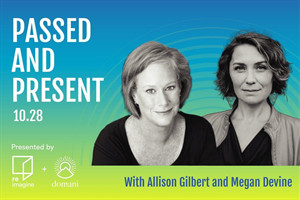 Join this urgent conversation on grief & remembrance with author Allison Gilbert, and Megan Devine, psychotherapist, writer and founder of Refuge in Grief.

Bring your most pressing questions to our next event in the Passed and Present conversation series. Gilbert will host a new discussion the last Thursday of every month.

Psychotherapist Megan Devine believes that making the world a better place starts with acknowledging grief, rather than seeking to overcome it. She advocates for a revolution in how we discuss loss – personally, professionally, and as a wider community.

Megan is the author of the best-selling book, It’s OK that You’re Not OK: Meeting Grief & Loss in a Culture that Doesn’t Understand, and her guided grief journal, How to Carry What Can’t Be Fixed. Her animated “how to help a grieving friend” video distills a complex issue into simple, actionable steps in just over three (adorable) minutes. Gaining over 50 million views in its first few months, the animation is now used in training programs all around the world.

Allison Gilbert is an Emmy award-winning journalist and author of numerous books, including the much-anticipated, forthcoming biography of Hearst newspaper columnist Elsie Robinson, to be published by Seal Press, an imprint of Hachette Book Group, in 2022.

On 9/11, Allison was a television news producer in New York and was nearly killed by falling debris when the second tower collapsed. She is the official narrator of the 9/11 Memorial Museum’s historical exhibition audio tour, the only female journalist to be so honored. To mark the 20th anniversary of the attacks, she is executive producer of two film projects in collaboration with the 9/11 Museum and Wondrium: a documentary called, "Reporting 9/11 and Why It Still Matters,” and a 20-part series entitled, "Women Journalists of 9/11: Their Stories.” Both projects explore what it was like to be a working journalist covering the terrorist attacks 20 years ago and how the aftermath changed journalists and media forever. Featured journalists include Tom Brokaw, Savannah Guthrie, Maggie Haberman, Linda Wertheimer, Scott Pelley, and many others.

Allison writes regularly for the New York Times and other publications. On her popular grief and resilience blog, she features Q & A’s with some of the most notable names in our culture today including, Arianna Huffington, Jon Stewart, and bestselling authors Henry Louis Gates, Jr., Dani Shapiro, and Susan Orlean. She is co-editor of Covering Catastrophe: Broadcast Journalists Report September 11.

The Passed and Present series, named after Gilbert’s inspiring book, is sponsored by Domani for Grief, a platform created with a single goal in mind: to provide in one place the best and most trusted resources, support, and information available to begin the healing process. “Domani” means tomorrow in Italian. Domani for Grief believes there’s always hope in a brighter tomorrow.

Registrants will be added to the Domani for Grief & Reimagine e-newsletter lists.